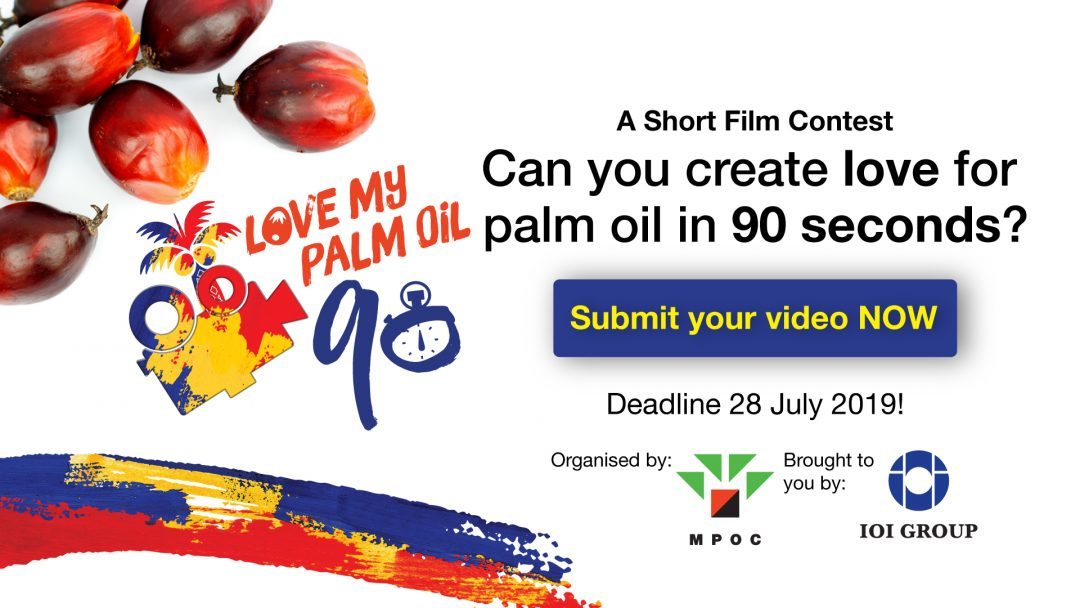 KUALA LUMPUR, 15TH MAY 2019 — In conjunction with the LoveMyPalmOil campaign, the Malaysian Palm Oil Council has decided to organise a 90-second short film contest to raise awareness and instill a greater sense of appreciation as well as national pride in Malaysian palm oil.

The contest will allow the brilliant minds of our next generation to share with the nation the benefits and positive impact that palm oil has to both the nation and our individual well being.

Preceding the contest will be a series of workshops that will be conducted for students of the partnered academic institutions with the aim of educating on palm oil related topics. The contest will be open to all members of the public. The top 3 short films from the contest will then have their content produced professionally to be included as part of the “LoveMYPalmOil” campaign.

For further information with regards to the “LoveMYPalmOil90” short film contest, registration, and guidelines, please visit: LoveMYPalmOil90 and Facebook

Registration is open to all members of the public.

LoveMYPalmOil is a campaign organised by the Malaysian Palm Oil Council in collaboration with IOI Corporation Berhad to instill a national appreciation and raise awareness for the commodity of palm oil.

Palm oil has been wrongfully depicted in the media across the European region and by the European Delegated Act. The campaign wishes to ensure that palm oil is supported by the right voices and is not discriminated.

The commodity of palm oil plays an integral part of our average lives, being an ingredient of everything from consumables and non-consumables such as cosmetic and personal care products.

It is also high in the value of health benefits; free of trans fats and genetically modified organisms, rich in antioxidants and well balanced in saturated and unsaturated fats to name a few.

In Malaysia, efforts to “give back” to the community and to nature have already been conducted, such as replantings in Sabah and adherence to the regulations of palm oil production to ensure the minimisation of environmental damage.

Ultimately, the LoveMYPalmOil Campaign strives to put the message out there that banning palm oil is an extreme measure that simply is not right. The answer lies within proper planning and execution to ensure sustainable production of the commodity and Malaysia has proven its consistency in this regard.